As we all know, the presidential election in the United States is drawing to it’s climactic end. Both Obama and Romney are putting their best foot forward in terms of winning public favour. But here at BPAH, we like to look at who is putting their best paw forward. Who could we be talking about? None other than the leader of the free world’s own Portuguese Water dog, Bo!

Here’s some back story on the black-and-white pooch: Bo was given to the Obamas following Barack being elected into office. Their eldest daughter, being hypersensitive to animal dander, dictated the need for a dog that was hypoallergenic. Hence, the Portuguese Water dog was one of the many contenders to choose from (for a complete list of all hypoallergenic dogs, click here).

Bo was bred in Pennsylvania. He was originally adopted by another owner and named “Charlie”, but was soon returned to the breeder because of an incompatibility (“Charlie” was meant to be a new companion for an older female dog, but pestered her by constantly trying to suckle!). Bo was soon after enrolled in doggy training classes. At 6 months old, this pooch was united with his forever family, the Obamas. Bo was named after the singer “Bo Diddley”. Since his adoption, Bo has had his very own baseball card made for him, including a dashing Presidential portrait of him as well as some fun facts on the flip side.

So what is Bo Obama really like? We can’t really know for sure, but here’s a run-down on what the breed is typically known for. To start, this breed originated from — you guessed it — Portugal. They were bred to be working dogs, mainly — you guessed it again — in the water. They would help herd fish into nets, retrieve lost bait, or were parcel messengers from ship to ship or from ship to shore.

Portuguese Water dogs are not commonly bred. As stated above they are hypoallergenic, which means that their curly coats do not shed. They are very smart, with a stamina that keeps up with their working duties. They have strong, muscular bodies and webbed toes. Their coats can range from a combination of black, white, or brown. They will grow to weigh anywhere from 35-60 pounds and stand at anywhere from 17-23 inches tall. Common problems to be aware of when owning a Portuguese Water dog is mostly in regards to their hair. Because they do not shed their hair it grows continuously. Grooming is imperative to avoid fur growing into their eyes and impairing their vision, as well as getting their coat matted. Regular brushing and professional grooming comes highly recommended.

Portuguese Water dogs are loving companions that are intelligent and easily trained in basic obedience and even agility. They are very attached to their owners’ every command, and do not often stray very far from their side. They thrive on being trained and learning new commands. If you enjoy social service, this breed is often a top candidate for working with the public due to their hypoallergenic coats, their social attitude and their ability to follow command. 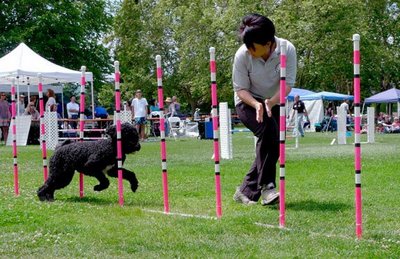 Like with most purebred dogs, be wary of selecting a pup that comes from a pedigree that has not paid special mind to eliminating genes for hip dysplasia, cataracts, the GM1 storage disease, and cardiomyopathy disorders.